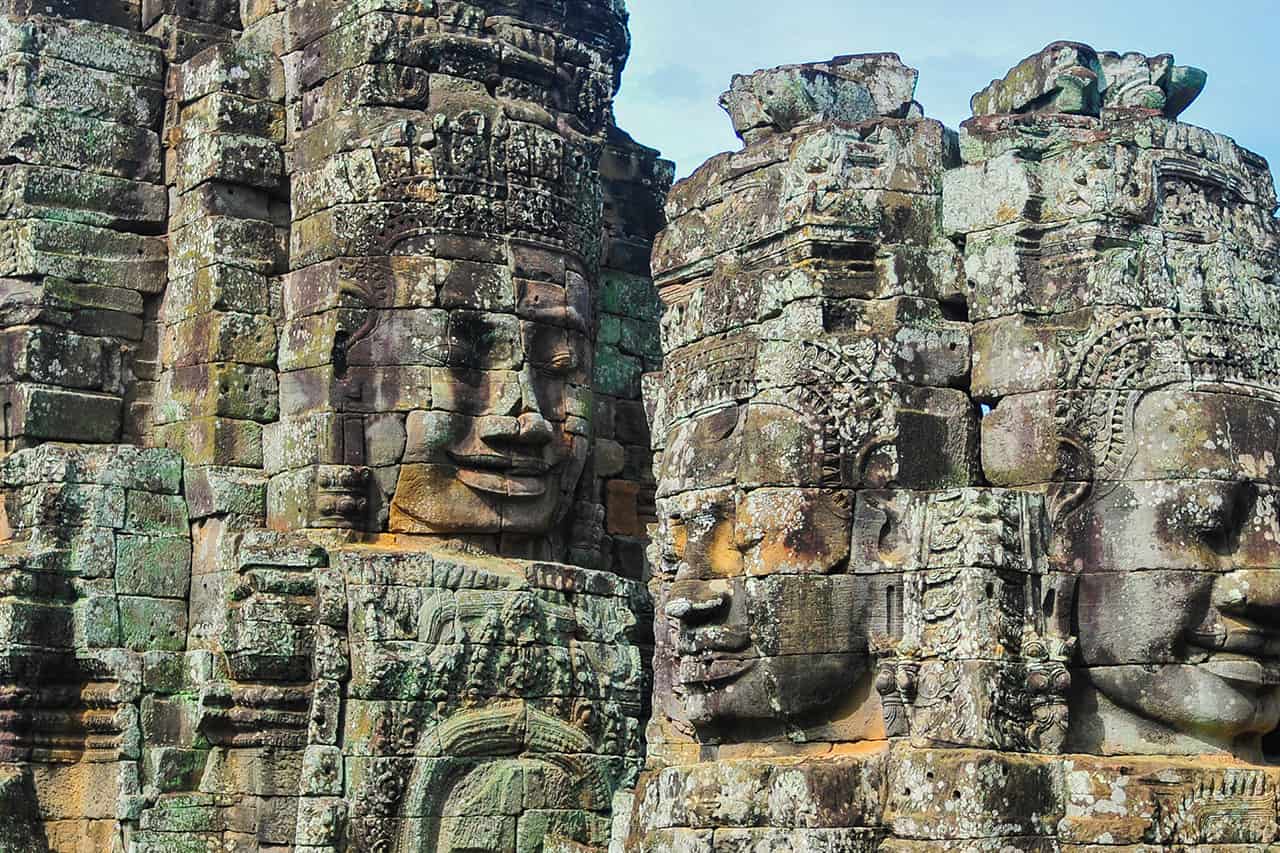 While Angkor Wat is the most well-known temple in the Angkor Complex, an equally gorgeous one which is worth visiting is the Bayon Temple. It is located right in the middle of Angkor Thom, and the sheer number of intricate carvings and its beautiful architecture makes this a monument you shouldn’t miss out on.

It was built by the most celebrated of Cambodia’s rulers, Jayavarman VII. Much like the king himself, it showcases distinct stylistic genius and creativity!

The temple consists of three main levels, which are in correspondence with the usual stages of construction of a building. This is attributed to the fact that King Jayavarman VII began building this temple when he was considerably old, thus doubting if he’d live to see it completely built.

The initial two levels are shaped like a square and are intricately carved with lovely bas reliefs. The third level is why this temple is so famous – it consists of a circular setting, from which arise 54 towers and 216 faces which have been carefully carved.

During the time this temple was being built, the Khmer Empire was split into 54 regions. This might explain why there are 54 towers.

On the first level, you can see bas reliefs which showcase the everyday lives of Cambodians in detail. On the second level, these carvings are more fragmented. The best way to view these reliefs is to enter the Bayon from the east entrance and travel clockwise.

Initially, there was no knowledge about who had constructed this marvellous temple. For quite a few years nobody knew.

It also took a significant amount of time for researchers to realize that the temple stands right in the middle of Angkor Thom. The temple itself is situated in the midst of a jungle and there is still a great deal of mystery which surrounds the temple.

Bayon was later altered and added to by later rulers of Cambodia, both Hindu and Buddhist. This was the last temple to be built in the Angkor complex, and was the masterwork of Jayavarman VII.

The Bayon was originally called Jayagiri, which means Victory Mountain. However, while Cambodia was a French colony, it was called Banyan Temple, which is thanks to the Buddhist artwork inside it.

However, when the temple was being renovated, Banyan was mispronounced as Bayon, and the name has remained as such since then.

The temple itself is built in the Baroque style of Khmer architecture, and is the most prominent example of its kind.

Bayon is notable for its distinctive, intricately made stone faces which smile and watch its visitors from the towers. There are also two sets of bas reliefs, which represent a mix of scenes from battle, history, and everyday life.

One of the most beautifully carved sections showcases a naval battle between the Khmer and the Chams, as well as the everyday lives of the citizens. There are a few unfinished panels, but they do not detract from the beauty of this magnificent temple in any way.

The temple may appear to be rather lacklustre from a distance, but once you step up to it, you cannot help but be awed by its majesty, especially once you reach the third level of the temple.

The most obvious feature of the temple are the 216 faces which have been painstakingly cut into the stone towers upon the temple. These faces have distinct expressions, ranging from calm to happiness, and their eyes seem to follow you around as you explore.

Bayon temple is surrounded by jungle, which only adds to its mystique. The temple’s bas reliefs are also notable not only for the details of the carving, but also the scenes which have been covered. Few temples depict everyday life as gracefully as these bas reliefs do.

The temple, while originally a Buddhist temple, now also features Hindu references thanks to the Theravada and Hindu kings who later modified it.

Why You Should Visit Bayon Temple

Among all the temples in the Angkor Complex, the Bayon is worth a visit for a multitude of reasons. Apart from the distinctive faces which have been built into the temple, its amazing carvings and bas reliefs will take you at least half a day to admire. It is the best example of the Baroque style of Khmer architecture.

Finally, it is a glorious tapestry that showcases Cambodia’s complicated history and past in stunning architecture.

If you want to visit Bayon during your stay in Siem Reap, speak to the front desk team at the Grand Bayon Hotel who will be more than happy to make all the necessary arrangements for you.

Why should you visit Siem Reap? Here’s 5 reasons why!

The Five Best Temples to Visit in Siem Reap

All About Ta Prohm Temple – The Tomb Raider Temple