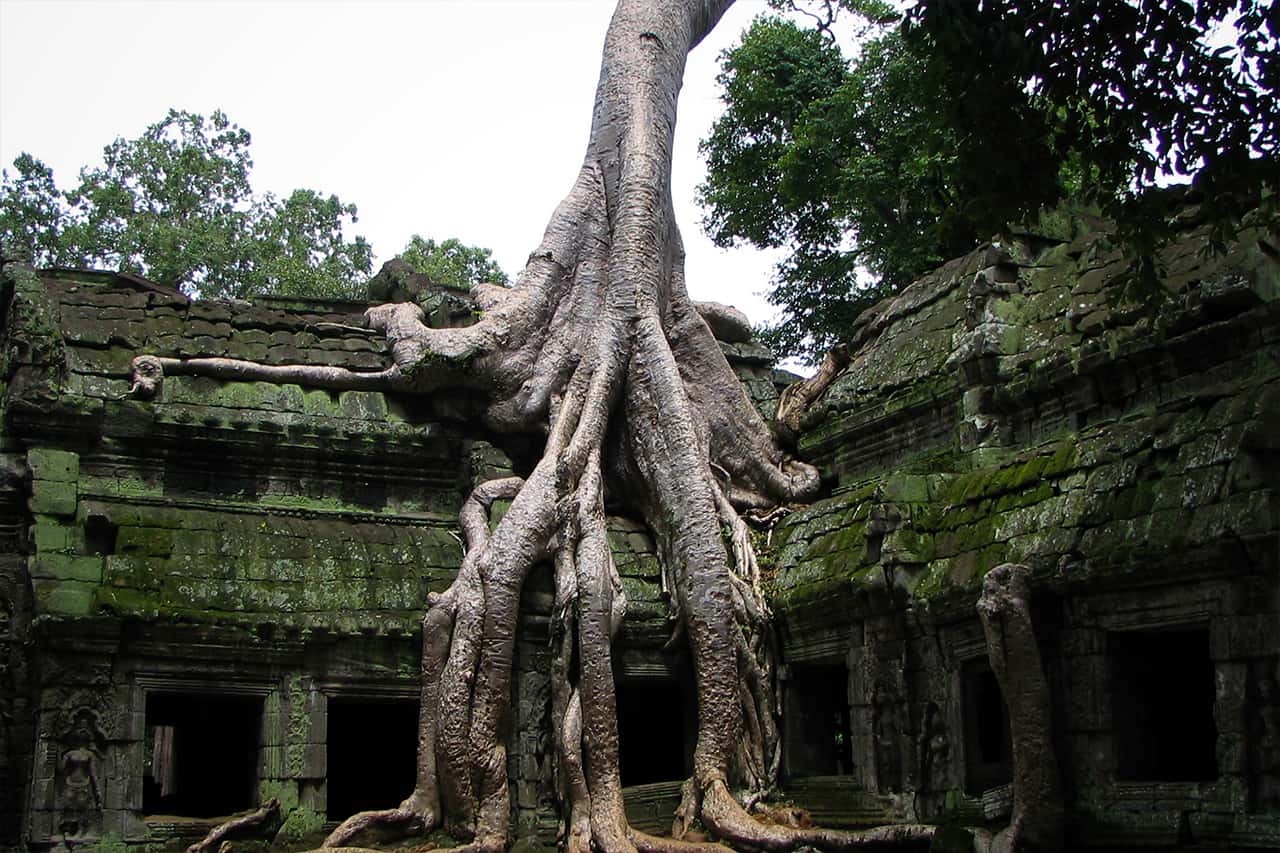 Cambodia is a nation which is well known for its numerous temples. However, Ta Prohm temple stands out from its fellows for one reason- the fact that it has succumbed to the jungle over the years.

The Cambodian jungle snuck into its cracks and crevices, creating a glorious mix of nature and architecture which must be seen to be believed. Thanks to its slow melding with nature, we are left with a structure which is truly unique.

This temple, where the roots of the trees wind through the stones of the building, is a beautiful example of the ways nature can enhance architecture.

Ta Prohm temple was built in 1186 at the pinnacle of the Khmer Empire. It was constructed by Jayavarman VII and was meant to serve as a Buddhist sanctuary and monastery, as well as a centre for learning.

The temple faded into obscurity with the rest of the Angkor complex as the Khmer Empire fell, but it was rediscovered in the 1900s by the French. While all the temples in the complex had been inundated by the Cambodian jungle, none has been affected as much as Ta Prohm.

Despite the difficulty which was associated with renovating this temple, the archaeologists ensured that the roots weaving through the temple did not adversely affect its structural integrity or made it dangerous for those visiting it. Though the temple looks neglected, it is in fact one of the most carefully maintained temples in the complex.

This temple was originally called Rajavihara, meaning monastery of the king. It was built to honour the king’s family and the temple’s chief image, which is the embodiment of wisdom, Prajnaparamita, is based on Jayavarman VII’s mother.

There are also other satellite temples which were dedicated to Jayavarman’s other family members, such as his brother, as well as one which was dedicated to his teacher, Jayamangalartha.

The temple’s records show that it was at one-point home to almost 13,000 people, with another 800,000 people living in the villages nearby. The temple forms a matched set with Preah Khan, which honours the king’s father and portrays him as the embodiment of compassion, Lokeshvara.

This temple was constructed in the Khmer flat style. There are five walls which are shaped like a rectangle, and they surround the centre sanctuary. The temple faces east, and the town which was originally in it is now covered by forests.

The temple has gopuras at the entrance which are situated in the cardinal direction. You can only enter through the east and the west side. There are also a few towers which have been carved with faces, like those found at Bayon temple.

There is also evidence that there were once moats in the temple, but these have long since collapsed.

While Ta Prohm has less bas reliefs than most Cambodian temples, the ones which still exist are lovely, albeit significantly eroded. The reason for there being a lower number of bas reliefs can be attributed to the temple’s Buddhist art being damaged by Hindu followers after King Jayavarman VII passed away.

The most unique feature of this temple is the roots that pass between buildings and the trees which seem to grow out of the ruins of the temple.

This intermingling of nature and architecture is absolutely stunning and the temple is in fact maintained rigorously to ensure this appearance remains.

The temple also has a carving in one corner which supposedly resembles a dinosaur – the stegosaurus. Some scholars dispute these claims and say that the carving is nothing more significant than a rhinoceros or a boar.

The temple is popularly known as the Tomb Raider temple as it was used as the backdrop of one of the Tomb Raider movies. Ta Prohm’s unique atmosphere and ruins catapulted the temple into the media’s eyes. Now, it is one of the most written about and most notable temples in Cambodia.

Why You Should Visit Ta Prohm

While the temple is not as notable for architecture thanks to its relatively low presence of carvings and reliefs, the trees which flow through the ruins create a lovely atmosphere.

Ta Prohm is one of the most popular temples on the tourist trail and if you’re looking to visit, please speak to the front desk team at the Grand Bayon Siem Reap Hotel and we’ll be happy to help you.

The Five Best Temples to Visit in Siem Reap