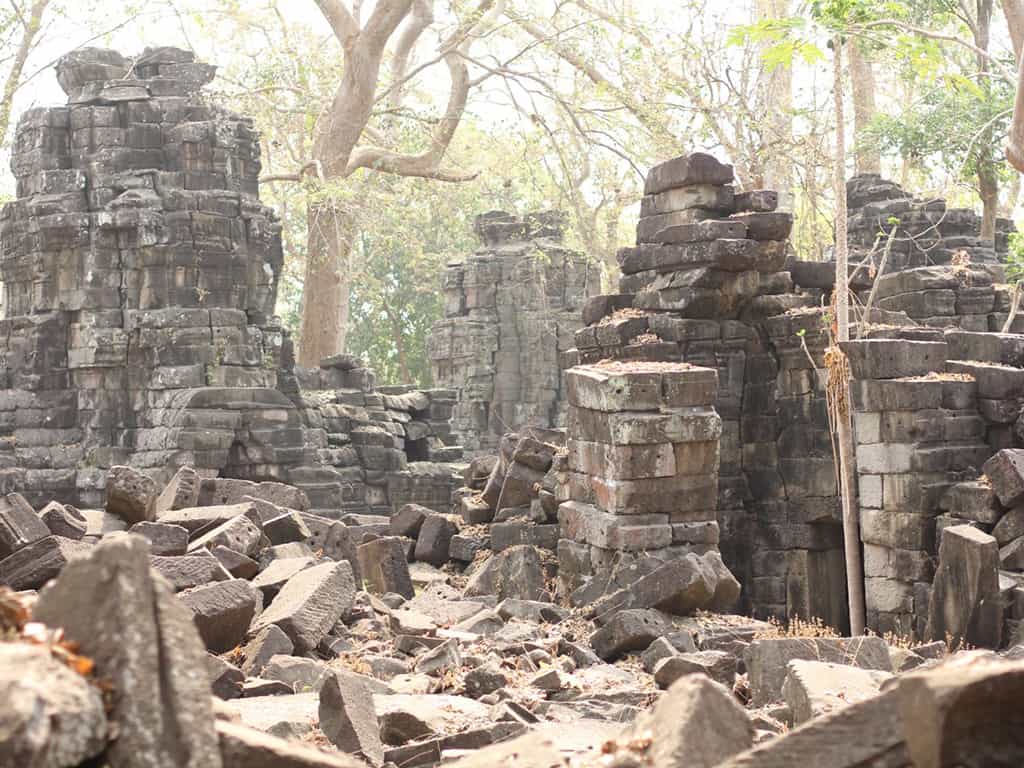 Most of the temples are located in and around Siem Reap province, easily accessible for day trips from Siem Reap town. There are, however, more remote temples built during the ancient Khmer empire which are rarely visited by tourists when compared to the millions which go to Angkor Wat.

When exploring remote temples, you can get away from the large crowds. This is perfect for people who want some peace – photographers, artists, or anybody else who wants to enjoy the temples in quiet.

All temples in this list are accessible from Siem Reap by day trip and the Grand Bayon Hotel can help you to arrange anything you need when visiting Siem Reap. We don’t include all these temples in our tour books, but we can arrange tours of these temples, just drop by our reception and let us know what you want to see.

Preah Vihear temple is one of the more popular of the remote temples. It’s located around 220km from Siem Reap and the journey time can be as much as 4 hours to reach the temple. Combined with the journey back to Siem Reap, this can be a long day trip, but it is possible.

The Hindu temple was built on top of a 500m cliff high in the Dangrek mountain range. Since 1962, there has been a dispute between Cambodia and Thailand about who owns the temple. Over the years there has been frequent skirmishes between the armed forces of each country. However, the International Court of Justice has since ruled the temple belongs to Cambodia and more tourists have recently started making the trek out to Preah Vihear.

Koh Ker temple is a little more than half the distance from Siem Reap to Preah Vihear temple. There is a protected area of 81 sqm, but only around 25 of the 180 monuments can be visited because the area hasn’t yet been fully demined.

In the early to middle 10th century, Koh Ker briefly became the capital of the Angkor empire. King Jayavarman IV started a building program. Large water tanks and temples were constructed. Many stone sculptures were carved but unfortunately many of these were looted in recent years. Pieces were taken by the French during their occupation of Cambodia. More recently, artwork was stolen during the Lon Nol and Khmer Rouge regime as well as the during the subsequent civil war.

However, the pyramid style temple is like no other built by the ancient Khmer and definitely worth a visit.

This is another temple located in Preah Vihear province and rarely visited by tourists because it’s around 100km from Siem Reap town. It’s a large site and includes four enclosures. There is a large baray which is nowadays mostly dry, an artificial island called Preah Thkoi, and a temple with a tower.

Unfortunately, Preah Khan of Kamplong Svay has suffered a similar fate to Koh Ker and was also looted. In 2003, the central tower collapsed during a looting attempt.

Banteay Chhmar temple is located in Banteay Meanchey province which is around 100km from Siem Reap. Banteay Chhmar is a huge temple complex which was one of the important during the Khmer empire. However, it’s also one of the least understood of all the temples made by the ancient Angkor.

Again, like the other remote temples, Banteay Chhmar has also been a victim of looting, especially in the late 1990s and early 2000s. In fact, it was looted so much as the World Monument Fund deemed it necessary to include the temple the top 100 most endangered sites in the world.

Sambor Prei Kuk is located in Kampong Thom, around 170km from Siem Reap. In 2017, the temple was listed as a UNESCO World Heritage site and it a very large and early example of Khmer architecture.

The temple predates Angkor Wat by quite a few centuries and construction first started in the 7th century. The whole temple as it stands today was constructed at various times in what is known as clusters.

These remote temples are rarely visited by tourists as they are a long way from Siem Reap. Each temple is able to be reached on a day trip, but it can be a very long day. If you are interested in visiting any of these temples, we can help you to make the necessary arrangements.

All About Ta Prohm Temple – The Tomb Raider Temple